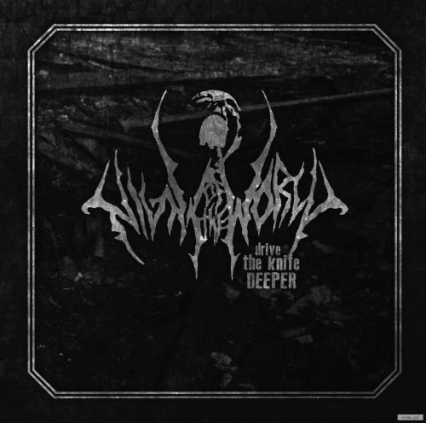 Nekrist: Who did inspire the name “Night of the World” – Hegel or Bradbury? Or maybe even “Miss Saigon”? Or someone/ something completely different?
It is the Darkness that inspired us. Not as the blackness and emptiness itself obviously, but as the comprehensive negativism inherent for every individual. Uncontrollable and terryfying. At present times of religious illumination in nowadays black metal we consider that Darkness to be one and the only right direction. Of course, certain German had added something but I’d prefer to avoid philosophical polemics about rightness of his conclusions. For there is no such a thing like the Truth.

N.: So who is behind Night of the World? And how did you come together? And, while we’re at it, when and how did you find your way towards Black Metal? (I think this is a question often asked bands from countries that were behind the Iron Curtain, right?)
Behind NotW at this very moment there are four random people, who gain ultra-ultimate pleasure from masturbating with musical extremism. We know each other for years, though we are separated by more than 600 kilometres. We didn’t have to seek for Black Metal, it is Black Metal which had twisted our biographies much earlier. The Iron Curtain, likewise other political divisions, had no influence on that fact.

N.: It seems that “Drive the Knife in deeper” was written in just a short time. Who does all the creative work? I often heard that it’s simpler (and faster) writing songs alone and sort of presenting them to the other band members. Is that true for you, too? Or how does your songwriting-process work?
I doubt that in our case there is something like proper principle of creating notes. And even if there is one, I don’t care about that, not to mention people reading this interview. As you’ve noticed – we create ‚The Destruction‘ relatively fastly: while shooting from machine gun there is no time for melancholy.

N.: Your stage names puzzle me. I understand NTR to be an abbreviation of “Namtar”, but what is behind ML and AM? Just your initials? Or is there something more to it?
If we wanted to add some message behind our nicknames we would certainly do that.

N.: Please describe “Drive the Knife in deeper” in just one sentence.
Relentless sonic depiction of nails of horror that haunts believers as well as infidels, a disintegrative power of negativity, the uttermost decline of light.

N.: I read somewhere that you played the songs live in studio. Why’s that? And how did that effect the sound of Night of the World? Would you consider doing it “the regular way” for the next album?
This material is tfucking merciless fire leaving behind only conflagration and I cannot imagine clearing it and making it more polite. Due to such attitude I feel at least, that these notes are authentic. Every year there is more albums created mainly by sound editors. I fuck such considered extreme metal.

N.: Your homepage says that Night of the World “is the relentless sonic depiction of nails of horror that haunts believers as well as infidels, a disintegrative power of negativity, the uttermost decline of light.” And yes, I agree, listening to “Drive the Knife in deeper” that description came to my mind without having read those lines. What does inspire this? And what pleasure do you gain by exploring the depths of horror?
Few sentences above I’ve pointed at our inspiration. And even though that while plunging into this swamp of negativism and malignancy we gain divine pleasures, we do not forget that meanwhile the Abyss equally intensively stares in our intestines.

N.: I didn’t expect a song called “Urbi et orbi” on a Black Metal album. What is it about, and why did you choose the title?
This title is so banal, that all tryouts to explain the core of its meaning paralyze with lack of respect for the receiver. But for those who have not much in common with knowledge about pontificate, I exceptionally suggest: greetings and wishes not always have to be positive.

N.: “Drive the Knife or yourself deeper” – what does that mean?
Humanity doesn’t know the borders of crime and suffering. What can you do about that?

N.: And what exactly is “The Serpent within”?
It is not my habit to explain what is the exact sense of my lyrics. It is the matter of interpretation which I leave to receivers: every single man should have his own opinion, a whole in the ass alike.

N.: Speaking Russian myself, I always thought the Slavic languages would be perfect for Black Metal because of the harshness in the language itself. Why do you sing and write in English?
So why this interview is carried in English then? The answer is trivial and obvious. Nevertheless I don’t agree with your opinion about stronger harshness of Slavic languages comparing them to Germanic ones.

N.: Sometimes I am under the impression that the Polish Black Metal scene is extremely incestuous – even more than the Scandinavian. How many side projects have you guys going? And where did you find time to start another one? Do you eat and sleep?
We have stopped counting our projects we are involved in long ago. It has no meaning any more. The most important thing for me is that I realize myself in wallowing in this violent and rude derision. Yet we are able to find other motivations: being popular with women for instance.

N.: You just can tell when you’re listening to a Black Metal band from Poland. What makes the Polish sound so unique? And how does Night of the World stand out from the “masses”?
Our aim is not to stand out from mediocrity. We perform unoriginal, predictable and monotonous extreme metal and all we strive for is to do that with same commitment and insolence as during creating ‚drive the knife deeper‘. Not to mention live shows. We don’t give a fuck whether are we distinctive at all – especially on Polish scene. Maybe by releasing debut album abroad, we confirmed that stronger than declaring it in hundreds of interviews.

N.: What’s up next? Will you play shows in Germany?
I hope so. And I think that German shows will be just the beginning of our sonic mutilation.

N.: Thanks a lot for the interview!