Who is behind Terrolokaust?
Behind this project called TERROLOKAUST are two characters with over 20 years of musical career, trying to create interesting things, but most importantly, staying faithful to the basic principles of personality.

If you had to put your music into a drawer and print a label on it, what would it say?
Actually, there are many things you could do and say, not a word that can be interpreted, no one has any idea of what’s behind this band. Effort, passion, suffering, is something that is always present in the „drawer“.

How would you describe the sound of Terrolokaust to a deaf person?
I think the correct definition would be visuality, attitude, composure and aggressiveness. That’s something you don’t need ears for.

Which instrument will surely NEVER be heard an a Terrolokaust-album?
A saxophone.

Which record would you want to listen to when you leave bath in the morning, while the beautiful girl from last night is still in your bed?
For me, the perfect soundtrack after a great night of sex, drugs and rock & roll could be Dead Can Dance and Johnny Cash.

Which song would you be proud of, had you written it?
We are proud of what we have written, as I said earlier, there is always a motive, a need for expression, a cry into the abyss. Our songs are our children, which is why we love them the same way. Another thing is that some of those songs worked better in the mainstream. 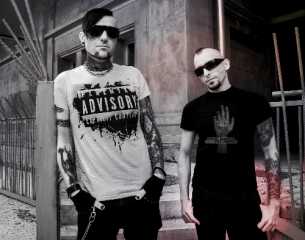 No alcohol is surely NOT the answer – after which combination of booze all your problems will have dissolved?
Sadly or happily, alcohol is often necessary for many things, and dullying the senses helps, I’m not a supporter of consumption, I lived almost two years of my life without alcohol testing, living similar to „Straight Edge“, but with the difference that I am not a vegetarian. Alcohol … the great dilemma …
The upshot of all this is that alcohol will not solve the problems, but if you don’t drink, the riots are still present.

What shows you a true friend?
Sincerity!

Who was the hero of your childhood?
My Father!

Are we alone out there?
I believe we are not alone, but I think if it were so, they really have nothing to do on this damn planet, animals in extinction, the ice melts, people starve, politicians are above our views with this damn corruption, etc …

What’s next? Tour? Studio? Vacation? Something completely different?
Right now, we are preparing our European tour, something we will discuss shortly, been to multiple festivals and several countries like Greece, Germany, Belgium, Netherlands, UK and Spain, and soon will travel to France and Russia.
We are also recording and filming our next video clip, if everything goes as expected, it will be released in December.
But of course, our machinery keeps running and never stop creating.