Who is behind K-Bereit?
Drey: K-Bereit was created in 2002 by Dominique Lallement, ex member of Kriegbereit and Cobalt 60, and an old friend. They released 2 albums. In 2012 Drey joined the band as manager and became the singer of the band in March 2013 (after the singer’s demisssion). Drey and Dom wants to bring glamour into industrial music, tired to hear all the same things and see all the same kind of people in this scene. Dominique is the main member: he is the one composing the music, the production guy and the leader, Drey is now the singer, but also manager and booker.

If you had to put your music into a drawer and print a label on it, what would it say?
Drey: We did and it says „Dark, danceable and glamustrial“. Dark, well,you know why. Danceable because we decided to do that kind of music: lots of people can say that we do easy listening music, but we only do music to make people dance and have fun. We don’t have the ambition to change the world with our music And glamustrial is a word that describes the glamour we are putting into the music : female vocals, hot videos, real live performances with surprises, a new look … Something brand new, finally!

How would you describe the sound of K-Bereit to a deaf person?
Drey: Well, that’s a hard question. Is the person deaf since its birth or did she/he hear before? Well, let’s say he/she’s born deaf. I think that we are lucky enough to have a very present visual, and a lot of energy on stage. Someone can see us live, or watch our videos without the sound, he will understand the rage, the cabaret side and the electronic part. That’s why we are working so hard: all of your senses should be involved in the music. It’s a real spectacle, not just something you hear and forget.

Which sort of panic creates the best songs?
Drey: People are dancing and singing. We used to tour with a lot of songs that people knew, and they were singing with me. It’s pretty amazing to hear that It’s really amazing to see how people know songs, sometimes I was like them, yelling at some moments because the music is so good. And other times, I used to surprise them by changing the way of singing: adapting the lyrics to my voice. We used to play new songs, and they have good feedback, especially a song called „Spiders in my head“ that is a kind of electro punk song. I think that it will be a new masterpiece. 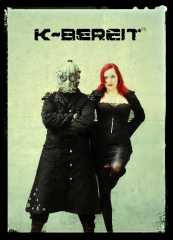 Which instrument will surely NEVER be heard an a K-Bereit-album?
Drey: None Dominique is open minded, and he is good enough to use things you can’t even imagine. I can’t say too much about the new album, but he did a lot of different music. And everything fits together. So, there’s nothing impossible in music, and that’s what magic in that .

Which record would you want to listen to when you leave bath in the morning, while the beautiful girl from last night is still in your bed?
Drey: First, people have to know that Dominique and I are engaged, so if I have someone in my bed, it would be him. And I would listen to „Nova“ from VNV Nation, because he makes the light shine on me, every day since we met.
Dom: „A Whiter Shade of Pale“ by Procol Harum.

Which song would you be proud of, had you written it?
Drey: I am proud of all lyrics and songs I record, because they’re brand new for me. But of course I would like to make a kind of magistral romantic electronic song like „All beauty destroyed“ by Aesthetic Perfection.
Dom: Well, too much, in every kind of music you can find a song that makes you think „woah, if only I got this idea“. But to answer you, I will say „A Whiter Shade of Pale“ by Procol Harum. Or any Mozart concerto.

No alcohol is surely NOT the answer – after which combination of booze all your problems will have dissolved?
Drey: Dominique is known all over the world by the name of „DJ Absynth“. We spent a night in Barcelona and he got drunk with absynth because they do not put water in it :-) So, let’s say absinth, or Champagne, because the town we are living in is the capital of this delightful drink.

What shows you a true friend?
Honesty, respect and trust. A true friend can say whatever he wants, if he respects you, and if he says it because he thinks it, and not because he can take advantage on you. We had a lot of friends, now we only have few. Friends can be the worst ennemies. So to be a friend of us, it’s a long hard work, but if you manage to, then you will never be alone.

Who was the hero of your childhood?
Drey: Madonna, because she was always hot and I was singing her songs in my bedroom, looked like in her videos. And Catwoman (the Michelle Pfeiffer version), for the dark side, the fetish part and the attitude.
Dom: When I was a kid, it was Amstrong, Collins and Aldrin (I wanted to go to the moon). And as a teenager it was Indiana Jones.

Are we alone out there?
Drey: I won’t answer to that, or there will be no band anymore :-) It’s a subject that we often talk about, and we do not agree.
Dom: I hope that we are not alone. The universe is so big, it would be sad to be alone, no?

What’s next? Tour? Studio? Vacation? Something completely different?
We are never on vacation. I’m using Dom as much as I can. Dominique is working on some remix and on our new album, called „Glamustrial“ (out in the beginning of 2014). We are starting the Life is not a Fairytour on october 5 in Amsterdam. Then we hope that 2014 will be K-Bereit’s year, with major festivals and touring over Europa and South America. And maybe a wedding, if we have the time.